As with most summer blockbusters, a slew of collectible merchandise is available for anyone who would like to show their love for the movie. The exact same goes for Pacific Rim, both NECA and Sideshow Collectables are hard at work to deliver some truly eye-catching pieces for fans. From small, affordable and highly articulated figures to large, extremely detailed, yet high cost statues. All dates are subject to change. 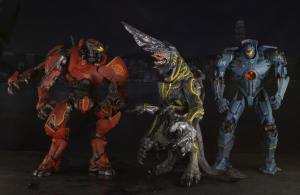 Included in NECA’s first series of figures is lead Jaeger, Gipsy Danger as well as China’s Crimson Typhoon Jaeger. To fight these guys, we also have the Kaiju, Knifehead. Both the Jaegers are about 8″ with some great articulation for endless posing options. The articulation on the Kaiju is limited though, so please bear that in mind. None of them come with accessories either, which is a real shame. Out now.

Only to be fully revealed this coming weekend at SDCC, we know its coming and what will populate Series 2. A battle damaged Gipsy Danger with sword accessory, Australian Jaeger, Striker Eureka and lastly is another Kaiju, Leatherback, responsible for one of the best fight scenes in the movie in my opinion. Be on the lookout for pictures of Series 2 next weekend from SDCC, and let’s hope NECA give Leatherback better articulation than Knifehead. Out August. 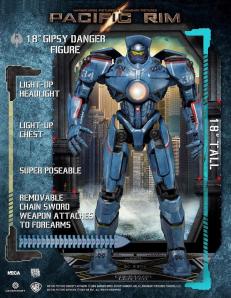 Continuing with their successful large-scale figures, NECA will be bringing Gipsy Danger to 18″ scale, with better paint work, articulation, light-up features and an included sword accessory. More details will be shared during SDCC, as well as more pictures of the product. Out September. 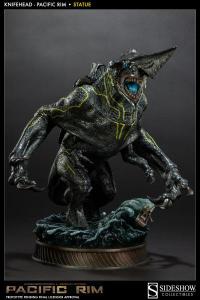 Sideshow Collectables are responsible for some beautiful pieces, crafting statues with the best detail you’ll ever see. The price of $379.99 may seem steep, but the quality is there. Sideshow is also said to be working on a Gipsy Danger of their own as well as a Striker Eureka statue too. Those however are yet to be officially unveiled. Out 2014.