A look back at some of the good, bad and ugly zombie movies made by the Godfather of Zombies himself, George A. Romero. 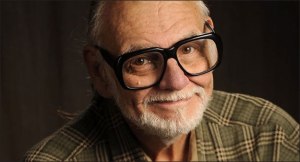 Those glasses are magic, I swear.

So after watching World War Z (Review Here), I found myself looking back at some of my favourite zombie movies, most of which come from the mind of the one and only George A. Romero. He has currently done 6 movies in his ‘Dead’ series, but which is my favourite and what should come next?

Night of the Living Dead (1968) – About a small group of people trying to survive the night in a farmhouse, Night of the Living Dead started it all. Being in black & white and seen by many to be the first zombie movie (it wasn’t), 45 years later it’s still an extremely creepy movie with a great atmosphere. Despite being black & white it’s actually quite graphic too and can end up leaving a lot to the imagination of the viewer, a very effective technique.

Dawn of the Dead (1978) – No doubt to be one of the most recognized zombie movies ever made, Dawn of the Dead is a lot of people’s favourite of the bunch, but not quite mine. Feeding the fantasy of everyone on earth, being let loose on an empty shopping centre, it’s no surprise so many people enjoy this movie. About 4 survivors taking refuge in an enclosed shopping centre, making it more like home with each passing week, it shares a similar premise to Night of the Living Dead, but with a different backdrop.

Day of the Dead (1985) – Now this is my favourite zombie movie. Ever. The zombie effects by Tom Savini had been perfected from his work on Dawn of the Dead and just the overall tone of the film was much darker in my mind. About the increasing tension between a group of scientists and military personnel seeking refuge in an underground mine, turned into a make-shift lab, Day of the Dead focuses more the threat we have on each other. From the opening scene in the street to the zombie infested mines of the end of the movie, this movie is full of memorable sequences.

Land of the Dead (2005) – After a 20 year wait, George A. Romero sides with a major studio to bring another zombie movie to the big screen. With a bigger budget, George was able to create the zombie movie he had always wanted to. Unfortunately, the studio had a say in a lot of what happened in the film. What we got to see was glimpse of what George really wanted to achieve. Feeling very Hollywood, the movie is about the conflict between the rich and poor in a walled off city that houses the remaining human population, that we eventually see fall victim to the zombies.

Diary of the Dead (2007) – Trying something new, Diary of the Dead adopted the use of the found footage angle. Set against the backdrop of the initial outbreak of the zombie infection, we follow a group of film students as they travel home, documenting what they see. It was a fascinating concept and one I found myself very excited for. Whilst being a decent movie, I feel we needed more zombie hordes and gore for it to feel more like a George A. Romero zombie movie.

Survival of the Dead (2009) – A sequel to Diary of the Dead, sharing some characters for the first time in the George A. Romero ‘Dead’ series, we follow a group of National Guardsmen as they seek out an Island taken over by a family that have been chaining up zombie friends/ family awaiting a miracle cure. This is by far the weakest of the bunch, I found little entertaining about it, only the fact that it was a George A. Romero zombie movie.

Seventh Movie of the Dead (????) – Let’s all face it, George A. Romero isn’t getting any younger. At the age of 73, does he want to be doing this for as long as he lives? All I ask, as do many fans, is that he does one more movie, his big send off. One that goes out with a bang. Large hordes, plenty of gore and likable characters is all I ask for. Of course the chances of this happening are slim at the moment, as there is little to no news of any movement towards another George A. Romero zombie movie. Also, like rumoured for Survival of the Dead before being canned, it should just be called ‘of the Dead’.

To this day, it’s impossible to think of a zombie movie without thinking of one made by George A. Romero. He deserves a chance to bring the pinnacle of zombie movies to the big screen once again, and I sure hope he gets that chance.